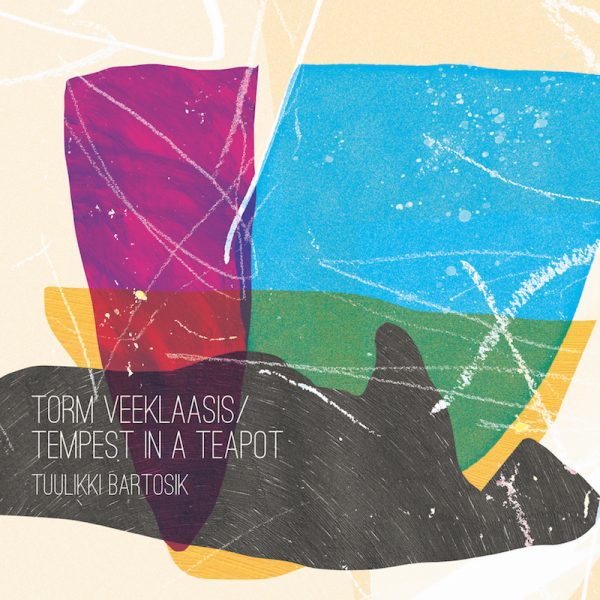 Tempest In A Teapot is the Estonian accordion stylist and musical experimenter’s second solo album, the follow-up to 2016’s internationally acclaimed Storied Sounds. Her new album is, she continues, ”a story about me, my roots and where I find myself – the longing for nature and friends, how I work as an individual in nature, the desire to find a place in the world and also in the musical world. I hope it helps people think about their own lives, to find themselves in it.”

“It’s about small things having bigger dimensions than they need, about details and how they develop,” says Tuulikki Bartosik of the title track of her new album Tempest In A Teapot. “In today’s global world, details tend to disappear but sometimes the small things can grow into big things although they do not need to do that.”

Tuulikkis roots are in Rõuge, Võrumaa, South-Estonia where most of the area is still covered with thick forests, and the special acoustics in a primeval coniferous forest is very close to her heart. The accordion experimenter Bartosik loves to explore, compose and even play in the forest where the sound reflection of the trees create incredible acoustical effects.

“The forest has been my favourite place to record for the last couple of years. I wanted to record my solo album in the forest, but it turned out to be impossible due to the damp conditions. My italian custom-built self-designed Pigini Caruso free-bass accordion did not like the humid weather during the quiet nights in the forest”, Tuulikki says.

In collaboration with producers Jonas Knutsson and Petter Berndalen and acoustician Matts Odemalm from SMT, Tuulikki found a perfect solution how to record her new album.

“Petter is not only working as a sound engineer but also a producer, creating the unique contemporary sound of Swedish folk and indie scene. His way of carefully forming the sound of musicians recording in his studio is both determined and gentle and there is always an innovative aspect present in everything he does. Petter can create a safe and relaxed environment for the recording musicians, constantly supporting their own ideas and never pushing, never judging, only guiding the ideas and gently forming the sound. It has been my great pleasure to record my solo album with Petter. His support and ideas of creating the best accordion sound considering all the aspects of my handcrafted free-bass accordion and my love for forest environment have been priceless”, she tells about the collaboration with Berndalen.

Berndalen, who is also the label manager, coproducer, recording and mixing engineer for this album, has recorded Tempest In A Teapot as the first full album inside the recording booth made of Wing modules by Matts Odemalm after several tests in Playing With Music Recording Studio in Stockholm. The Wing booth enables one to experience a broadband dense diffuse field in a surprisingly small booth. The sound spreading is comparable with a forest recording. Matts Odemalm has been developing this sound for over 20 years being particularly interested in recreating the crisp and clear forest sound indoors.

“When I closed my eyes and played, it felt like I was in the forests of Southern Estonia.
What initially felt impossible – to create a southern Estonian forest sound in an indoor environment, now became a reality in Stockholm in the studio on Valhallavägen. All of a sudden I heard the smallest nuances of my instrument and could improvise with the overtone harmonics. The result is a unique sound that describes my inner world on the dot and allows my custom-built accordion to sound throughout its whole sound spectrum”, Tuulikki tells.

Coursing through Tempest In A Teapot are the atmosphere of Philip Glass and Terry Riley. There is a kinship with Iceland’s Ólafur Arnalds and German minimalist Hauschka’s Abandoned City album. With the self-possessed Tempest In A Teapot, Tuulikki Bartosik celebrates her own identity, her place in the world and how she sees it. She communicates through her music. 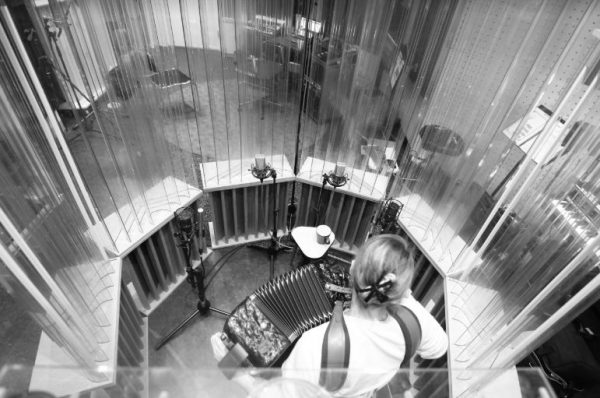 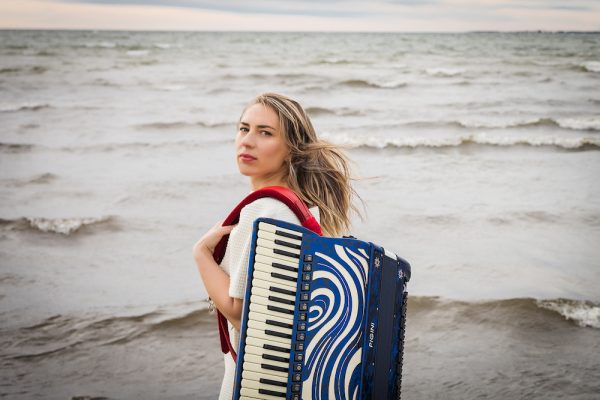 “The character and feeling Tuulikki Bartosik injects into her compositions and arrangements allows for a renewed appreciation of the accordion as a contemporary instrument.” Scotland’s The List on Tuulikki Bartosik live at Tallinn Music Week 2019

The journey through Tempest In A Teapot begins with the heart-rending “Crying Meadows” (“Nutvad Niidud” in Estonian), a meditative instrumental evocation of Rõuge (pronounced “roo-ga”), the South Estonia rural settlement where her family are rooted: the interwoven field recordings made there help assert her roots. It continues with the reflective “In Luce Amor” (meaning either “in light there is love” or “in love there is light”), composed by Tuulikki as an emotional reaction to being unable to attend a wedding.

It is followed by the extraordinary suite “Setting Sail For Freedom”. Its two sections, “Over The Sea” (“Lähme Üle Mere”) and “Coming Home” (“Kojusaabumine”) affectingly tell the story of Estonians forced to escape their own country during World War II. In 1940, Stalin’s Russia occupied Estonia. Then, in 1941, Nazi Germany replaced them. Russia returned in 1944. Tens of thousands of Estonians fled the serial occupations. Many went to Sweden. In July 1945, some found a 37-foot pleasure boat and decided to get to America. Sixteen men, women and children left Sweden the next month. Via Norway and the North Sea – they had heard Stalin’s forces were in France so didn’t navigate through the English Channel – they headed to Scotland, where sympathetic officials gave them passage through the Caledonian Canals to reach Ireland from where they proceeded south to Portugal and then plotted a course west across The Atlantic. After a storm off the coast of America on 14 December, the U.S. Navy found them. They arrived in America 128 days after leaving Sweden. On 18 November 1946, President Truman declared that Estonian political refugees were welcome in America. Tuulikki recorded all the parts herself, creating an orchestra with her accordion. “Traditions travel by sea,” she says of “Setting Sail For Freedom”. “Water brings us together, creating something positive to balance the anxiety and imbalances in the world, to spread female energy through music. Even though ‘Setting Sail For Freedom’ tells the story of finding a new home it’s also about that if we want to keep our traditions, we cannot isolate them. To keep traditions alive, we need to travel and have other people coming to us.”

After this epic, transformative journey, Tempest In A Teapot returns to Estonia. The dynamic “Forgotten Village Polka” (“Mälutaguse Polka”) celebrates the great Estonian accordionist Karl Kikas. “Josefin’s Lullaby” (“Josefini Hällilaul”) was written for Tuulikki’s sister-inlaw‘s seventh birthday. “Tempest In A Teapot” (“Torm Veeklaasis) precedes “Rõuge Waltz” (“Rõuge Valss”), which is dedicated to the home of her ancestors. The album ends with “Dear Friends”/“Orukalda Waltz” (“Oh Sõbra”/“Orukalda Valss”), with Tuulikki playing the 11-string Estonian kannel, the zither-like instrument unique to the country. The words are those of poet Artur Adson, who wrote in the South Estonian Võru language. After leaving Soviet-occupied Estonia in 1944, he was never able to return.

While Adson’s words are heard and the album’s Swedish producer Jonas Knutsson assisted with the arrangements of the final track and “Tempest In A Teapot”, the album is Tuulikki’s own. That these are her compositions raises the knotty question of whether she plays folk or traditional music. Coursing through Tempest In A Teapot are the atmosphere of Philip Glass and Terry Riley. There is a kinship with Iceland’s Ólafur Arnalds and German minimalist Hauschka’s Abandoned City album. Tuulikki may have master’s degree in Traditional Music from Finland’s Sibelius Academy, but she was fired up by heavy metal during the period Estonia achieved independence from Russia and is an avowed fan of Queen.

Asked if she plays folk, Tuulikki counters “I feel more comfortable with, shall we say, ‘original music.’ This is my music, my tradition. It roots are in Võrumaa but I’ve been living in different cultures and travelling, these have their impact.”

Indeed, Tuulikki has travelled in the run-up to the release of Tempest In A Teapot. She toured Japan in October 2018. Earlier in the year, she was at Glasgow’s Celtic Connections Festival. She also represented her country at the Euroradio Folk Festival in Moscow in 2018 and, in 2017, accompanied Estonia’s President Kersti Kaljulaid on her state visit to Finland for their centennial celebrations.

Collaboration is in her make-up too. She has worked with England’s Hannah James, the clog dancer and fellow accordionist (their joint album Chatterbox was issued in 2015). For Celtic Connections, she conceived the all-female accordion group Accordionesse. In Japan, she has worked with Hiroko Ara and Kato Kanako. Tuulikki is also pivotal to the Estonian Folk Orchestra. “All collaborations affect me, leaving their marks in my body and mind,” she reflects. “So new things come out of me. The right collaborations always have an impact on everything I do solo”. Tempest In A Teapot though is a solo album, one distilling Tuulikki’s search for personal expression; a quest encapsulated by the album’s artwork. “There is a message in the fishes,” she laughs. “Fish can swim anywhere, nobody can tell the fish where to swim. Sometimes I feel like a fish. It swims where it needs to swim.”

Turning serious, Tuulikki states “There are many different fishes in the world. That is the message.” With the self-possessed Tempest In A Teapot, Tuulikki Bartosik celebrates her own identity, her place in the world and how she sees it. She communicates through her music.